On Monday I took delivery of my linocutting kit. I’ve wanted one for ages: I get almost indecently excited by the rich black of the print. There’s really nothing else like it and the simplicity is a world away from the complex mixed-media layers of the art I’m normally drawn to.

I’ve held off buying the stuff needed because, although it’s not super expensive to get started, I have so many projects on the go that it seemed silly to start another. But, after a lovely morning on Saturday browsing examples of simple linoprints, I just decided to go for it.

So, lots of excitement when it arrived! And of course I wanted get stuck in straight away, so I grabbed a tool and started to roughly carve out a face. Great fun! I made some test prints on a lose page of an old book, then decided to attempt a house to make a card for a friend who’s just moved house. I have to say the resulting print, although rough and simple, is a lot nicer than the overall completed card which looks a bit cobbled together but it was fun!

- The soft cut ‘lino’ is about right for me. I will stick to it for while.
- I need to use more ink than my initial instinct tells me.
- The ink takes longer to dry than I thought it would.
- I need to do something about inky finger prints. 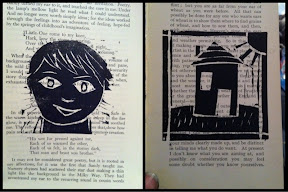 Next? I think I’m going to try a cat…